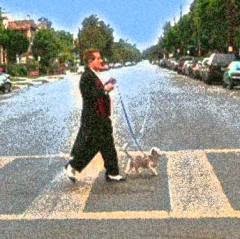 Three-times nominated for the prime-time EMMY Awards, this is GRAMMY-winning songwriter Michael Silversher's 40th year in music, theatre, films and television, beginning with a staff-writing position with the Fifth Dimension in 1969, followed by ten years as founding composer/musical director of THEATREWORKS in Palo Alto, CA.

Since 1986, Michael has written, composed and created sound design for Tony Awardwinning theatre companies, THE MARK TAPER FORUM and SOUTH COAST REPERTORY, and has toured the world in support of theatre.

Michael was founding and resident composer, musical director and resource artist for Robert Redford's SUNDANCE PLAYWRIGHTS' LAB AND CHILDREN'S THEATRE from 1991 to 1996, creating musical scores and songs for many shows that have been produced at Sundance and other theatres all over America.

Michael works regularly with the KENNEDY CENTER in Washington, DC., having a commissioned production of "How To Make An Apple Pie and See the World" and an opera based on Oscar Wilde's "The Happy Prince". Michael also gave the first solo concert of the new year on the Millennium Stage of the Kennedy Center on Jan. 1, 2000. And Michael's newest production with the Kennedy Center, "KNUFFLE BUNNY: A CAUTIONARY MUSICAL", based on the Caldecott Honors-winning book by Mo Willems, with Mo and Michael collaborating on the songs and Michael composing the score opens in May 2010.

He created L.A. OPERA's Community Outreach Opera for the years 2000-01. "Friday Night at Hodges' Café" premiered in October 2000. He received a commission to write a new musical for SOUTH COAST REP's multi-million dollar new Julienne Argyros theatre for 2004. Based on Kenneth Grahame’s "The Wind in the Willows". It had its world premiere in June 2004. His commissions for 2005 included a musical based on the novel “Gathering Blue” by Newberry-award winner Lois Lowry “Gathering Blue” featuring a new musical collaboration with composer Joy Sikorski. Both shows feature books written with long-time collaborator Richard Hellesen. They have written fifteen Educational Touring shows for South Coast Rep, along with the two musicals, "Wind in the Willows" and "Gathering Blue".

In television, Michael recently composed the score for seventy-five episodes of the hit TV series, "Dinosaur Train", a collaboration between Jim Henson Productions and PBS. With his other long-time collaborator Patty Silversher, they composed all the songss for another Henson/PBS Sprout series in 2008, "Pajanimals". Michael served as composer, arranger and musical director/supervisor of the Jim Henson Company television series, "Animal Jam". They composed thirty-six new songs and created thirty episodes of underscore for the all-musical series for the Learning Channel.

As songwriters, Michael & Patty Silversher have written over a hundred songs for the Disney song catalog over the last fifteen years, including Donald Duck's 50th Birthday song, and Mickey Mouse's 60th Anniversary Song.They have also written the theme song to the Warner Bros/ABC series "Eye to Eye", and Michael was the singer on the main title sequence.

In 1997 and 1999, Michael and Patty were honored with Emmy nominations for Outstanding Individual Achievement in Music and Lyrics for their work in two Disney specials, BOO TO YOU, TOO, WINNIE-THE-POOH, and WINNIE-THE-POOH: A VALENTINE FOR YOU.They were similarly honored in 1996 for Jim Henson Production's 1995 Christmas special, MR. WILLOWBY'S CHRISTMAS TREE (with songs by Michael and Patty and score by Michael). The soundtrack of "Elmo in Grouchland" won the Grammy Award for Best Children's Recording with Music in 2000.

Michael has additionally written for and worked with many diverse people over the years, including Frank Zappa, Robert Downey, Jr., Stockard Channing, Little Richard, Flo and Eddie, Phil Baron and even Gilbert Gottfried(!!).
Posted by MrRubato at 1:33 PM